Home Alphabeat Shapes & Sounds Shapes & Sounds Vol. 2 Shapes & Sounds Vol. 3 Look At The Sun Radio Tymes The Purple Barrier
'Shapes And Sounds' 45 The Action
'In My Lonely Room' EP Goldie
'Could It Be' EP The Artwoods
'Art's Gallery' Various Artists
'17 FROM MORDEN' Billy Fury
'Three Saturdays With Billy' THE KONTAX
'Near Me / Hold On I'm Coming' VARIOUS ARTISTS
From Morden To Wimbledon RAW MOD
The New Kind Of People 1965 — 1968 Wanted Ordering About Contact 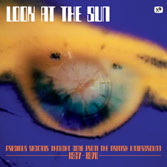 - all previously unreleased - recorded by some of the decade’s most obscure happening groups.

Genuine hardcore unreleased British psych is a rare beast indeed these days but Top Sounds believe they have found some with two late 1967 tracks by LOUISE, who played clubs such as Happening 44 and were most definitely the real deal as far as British psychedelia was concerned. Psych pop heroes KALEIDOSCOPE return with a newly discovered and much improved BBC version of ‘Faintly Blowing’ from 1967, together with a thought lost performance from the same session of ‘The Murder Of Lewis Tollani’. Portsmouth psychsters COCONUT MUSHROOM offer excellent fuzzy pop in ‘Without You’, then crank up the volume with a sledgehammer version of the Who’s ‘Call Me Lightning’. Top of many fans wants lists are new tracks by the FLEUR DE LYS, and unbelievably a cracking version of Albert King’s ‘Cross Cut Saw’ from a ’67 BBC session has been found for Look At The Sun. Rare BBC performances by ELMER GANTRY’S VELVET OPERA have also been located and two of the best tracks from Wooden Hill’s ONYX CD make their first appearance on vinyl. Infamous for their classic ‘Does It Really Matter’ and the fact that no-one had a clue who they were, the GLASS OPENING feature with not only that great B’side but also three other corkers cut onto acetates during 1968. GRADED GRAINS reappear with an excellent take on ‘Better By You, Better Than Me’, nestling closely to Andy Scott blasting out heavy prog pop riffs with the ELASTIC BAND on a previously unknown version of ‘Uptown, Downtown’. And closing almost an hour’s worth of music on a bonus 45 are two BBC performances by the venerable T2, one of which incredibly is an audio recording of their only television appearance!

Supplied with the obligatory 16 page booklet, the vinyl version of Look At The Sun will be available at the beginning of July, whilst the CD edition should arrive late July or early August.