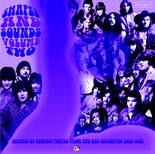 spanning the period 1967 - 1971, 'Shapes And Sounds' becomes a series and Volume Two features a completely different line up of bands from last years' set. Pride of place on this second edition arguably goes to the Gun, with three astonishing performances that were recorded nearly a year before 'Race With The Devil' which illustrate their late '67 menu of mod and psych pop, with cracking versions of Rupert's People's 'Hold On', Paul Simon's 'A Most Peculiar Man' and a quite splendid airing of their legendary 'Light On The Wall'! The Casuals surprise with the beat of 'Midnight Confessions' and 'Take Me For A Little While' as well as a fine rendering of 'Jesamine', whilst the Mirage perform a live version of their May 1967 single 'The Wedding Of Ramona Blair'. The Alan Bown play an excellent take of 'Magic Handkerchief' and even more interestingly offer two numbers that never appeared on any Bown release, with the self penned progressive popper 'Movie Star Baby' and a brilliant interpretation of the Association's 'Pandora's Golden Heebie Jeebies'. Also with three tracks on 'Shapes And Sounds' are Wales' Bystanders, who turn in a lovely version of 'Royal Blue Summer Sunshine Day' as well as a glorious homage to the Byrds with 'Renaissance Fair'. Even better and long talked about in collectors circles but never previously released is their absolutely stunning rendition of 'I Am The Walrus', which Top Sounds are sure will disappoint no-one! MORE »