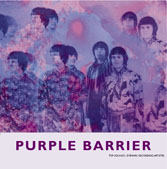 In the earlier days of record collecting there was a small clutch of titles that graced many a disc hunter's wants list, records for which contemporary documentary evidence of their release often existed, but were so elusive that no collector had actually sourced or even seen a copy. These items included 1967 stereo pressings of the Hendrix Experience's 'Are You Experienced' album, the Graham Bond Organization's Decca EP and perhaps most notably, the British issue 45 of the Yardbirds' 'Goodnight Sweet Josephine'. Amongst this bundle of seemingly impossible to find artefacts was a single on the tiny independent Eyemark label by the Purple barrier, which had apparently been released in the early part of 1968. However as information spread and experience grew it eventually transpired that the reason for the extreme rarity of all these titles was the fact that they had never been issued in the first place, and though they continue to fire the imagination these now mythical releases remain just that. 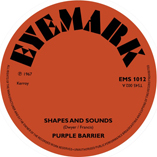 For all these legendary releases there was always actual musical substance, and with the Purple Barrier record its intended flipside 'Dawn Breaks Through' legitimately appeared on an Eyemark label 45 in May 1968, credited simply to the Barrier and hiding behind a ghastly tune called 'Georgie Brown'. It wasn't however until the early 1990's that the Purple Barrier's 'Shapes And Sounds' — the A' side of the fabled single — emerged on a compilation album, being sourced from a double sided acetate that had been retained by the group's singer Eric Francis.

'Shapes And Sounds' began life as 'Tomorrow Of Yesterday' and the original demo, together with an early attempt at 'Dawn Breaks Through', survived on an acetate kept by the now sadly departed Alan Brooks. 'Tomorrow Of Yesterday' has since been issued on the Spanish 10" 'First, Last And Always' but the fascinating demo of 'Dawn' appears here for the first time. Work progressed on both songs and by the end of 1967, professional finished recordings of 'Shapes And Sounds' and 'Dawn Breaks Through' and were ready for release. Work got underway for a 45 issue, two sets of different colour labels were designed and proofs printed but for reasons unclear the record never progressed beyond acetate and those prints.

'Dawn Breaks Through' eventually was relegated to the B' side of the first Barrier 45 'Georgie Brown' and was basically the same version as that intended for the Purple Barrier single, though the new 45 faded out the ending — on this single we have retained the original finale from the acetate.

Fast forward some 46 years and thanks to the band's singer Eric Francis retaining those proof labels, the Purple Barrier single that never was — complete with a fully restored 'Shapes And Sounds' , the straight from acetate finished version of 'Dawn Breaks Through' and the addition of the first recorded demo of the latter — finally gets a release — on Eyemark!