Top Sounds Records return to the compilation format with 17 From Morden, which collects together seventeen tracks all recorded at R.G Jones' legendary studio in South London during the mid 1960s. Only two selections have previously been released and all the tracks have been extracted from OAK label acetates, the inhouse imprint of R.G Jones which has fired and enthused collectors of rare 60s music for decades. 17 From Morden illustrates the evolution of British beat during the mid 1960s, with muscular Rhythm and Blues, tough beat, blue eyed Soul and Mod flavoured rock. 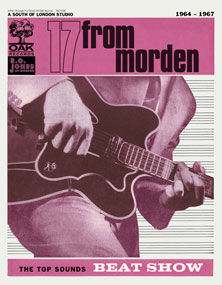 The Ancient Britons and the Roosters cover familiar R 'n' B standards with much verve, whilst the Cindicate with their blistering attacks on 'I'm Mad Again' and 'Respectable' have justifiable claim to recording the ultimate unreleased British R 'n' B single. The Southern Sounds, St James Infirmary and the Ramblers loudly explore that genre with their own compositions and the Night Society do a fine job of replicating the early American garage sound. The Candydates invigorate with some serious fuzzed out heavy beat whilst the Spirit Feel and the Old Berkeley Squares admirably knock out their own interpretations of American Soul and pop tunes. Moving in the Mod rock direction the Gabb and the Locomotion tear through 'One More Heartache', 'Finger Poppin' and the Young Rascals' 'Come On Up'. 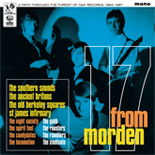 Then there's the obligatory unknown group with the moody 'Take Her Any Time' styled masterpiece 'I Need Your Loving Now'… and more!

All the music has been restored to the best possible standards and 17 From Morden is available on both limited edition vinyl and CD. The LP comes with the usual sixteen page booklet whilst the CD has a twenty four page tome.

SIDE ONE SIDE TWO