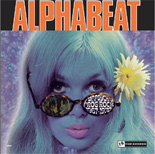 The Pathfinders - To Love Somebody
Graded Grains - Harry The Hermit


Compiled and realised by Nigel Lees (author of much of Record Collector magazine's long-running series 'The British Psychedelic Trip'), 'Alphabeat' marks the debut release on his own label Top Sounds, a collection which brings together 13 rare slices of pop,psychedelia and progressive rock recorded during 1967 - 1970. Only 2 have appeared previously on compilations, the remainder bar the obscure 1970 45 by Mississippi have never been released and make their vinyl and CD debut on 'Alphabeat'. All tracks have been professionally restored and the release includes an informative and profusely illustrated booklet which features histories of all the artists, together with many photos which have never been published before. The release has the blessing of at least one member of each group and in some cases several, and is presented in authentic 60s fashion with a laminated sleeve. MORE »