Preview : Could It Be

With television appearances on Not Only But Also and Ready Steady Go, a Top 30 hit with Can't You Hear My Heartbeat and many well received appearances on package tours alongside the Yardbirds, the Stones, the Kinks, Manfred Mann and the Hollies, Goldie and the Gingerbreads most definitely made an impression on the British pop scene during 1965. Towards the end of the year however Goldie decided to go it alone and this new Top Sounds EP showcases three of her earliest solo performances, all dating from early 1966. Could It Be features both sides of her immaculate Immediate label 45, Goin' Back and Headlines, which were released but quickly withdrawn and haven't been available on a single since February 1966. 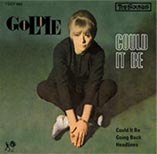 One Of Immediate's finest double siders, original copies have always been difficult to source. Top Sounds feel though that despite the reappearance on vinyl of these superlative recordings, many will be even more enamoured with the previously unheard Could It Be, a grand and effervescent serving of blue eyed soul recently discovered on an unreleased Emidisc acetate. Likely to find favour with both the Mod and Northern Soul scenes, Could It Be especially may prove to be one of the great 'lost' girl performances of the 60s.

As with all Top Sounds releases the music has been professionally restored and the EP - with its 'lightly aged' Immediate style colour picture sleeve — also features an eight page booklet, including numerous rarely seen pictures and illustrations. The booklet text tells the story of Goldie's early solo career and the good lady herself has been involved in the project.

With the exquisite Could It Be especially sure to impress, Top Sounds invite you to enjoy nine minutes in the company of one of America's foremost lady exports of the 60s....GOLDIE!