Top Sounds Records return once again with another collection of music recorded live for BBC radio and TV during the late 1960s and early 70s, with a significant proportion of wonderful material long thought lost. 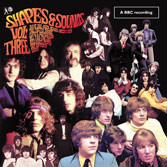 Available as usual on vinyl and CD the compilation begins and ends with some most welcome performances from BILL FAY, documenting his appearance on the Disco 2 television show in early 1971. With the TV programme being wiped this is the only known evidence of Bill playing live, and he performs in superb audio quality ‘Tell It Like It Is’ and a song he never recorded anywhere else called ‘After The Revolution’. Three tracks from THE PRETTY THINGS late 1968 session for Top Gear have been widely available for a while but the fourth, a version of ‘Old Man Going’, was never retained by the BBC - needless to say Top Sounds have located a master tape of the performance and are pleased to inform the Pretties’ fans that its even better than the album version, with the fuzzed guitar cranked up to maximum! A double CD of DAVE DEE, DOZY, BEAKY, MICK and TICH’s BBC sessions was released in 2008, but Shapes And Sounds Three adds to that considerable legacy with a better version of ‘Frustration’ and more spectacularly, the band’s fantastic psychedelic rock assault on the First Edition’s ‘Just Dropped In (To See What Condition My Condition Was In)’. Long time favourites with psych pop enthusiasts are THE END who have had much previously unreleased music released in the past, their BBC sessions however have always proved elusive as the BBC wiped their tapes. Rescued from off air recordings Top Sounds present two numbers from their 1968 ‘Top Gear’, with an atmospheric rendering of ‘Shades Of Orange’ and a brilliant take of ‘Under The Rainbow’ which is wildly different from the studio version on ‘Introspection’. MORE »