Included are excellent renditions of ‘Blow Up’ and ‘Colonel Brown’ but the pick of the bunch is almost certainly ‘Real Life Permanent Dream’, with its overdrive of twisting wah wah guitar throughout from the nimble fingers of Steve Howe. It’s been a while since any fresh music from Timebox was released and ‘Shapes And Sounds’ offers their four remaining session tracks from the Beeb archives, which include a beautiful version of their famed ‘Beggin’, a rendition of ‘Yellow Van’ which most definitely puts the single cut to shame, a superb take of ‘Stay There’ and perhaps most importantly, an admirable slice of blue eyed soul in their cover of the Young Rascals’ ‘A Girl Like You’, which the band never recorded outside of the BBC. 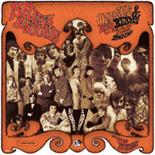 The Montanas’ discography is noted by many as being rather hit and miss but that is most definitely not the case with their inclusions on ‘Shapes And Sounds’, and most will no doubt be surprised and animated by the BBC take of their most prized pop/psych 45 ‘A Step In The Right Direction’. That excellent single was enhanced by a wash of phasing but in this live performance the song is literally drowned in a veritable tidal wave of that glorious wind tunnel effect, whilst ‘You’re never going to get my lovin’ would have made a better choice for a single than some of those that were actually released. The other Montanas performances form something of a Moby Grape tribute, with a cracking rendering of ‘Hey Grandma’ and a blistering attack on ‘Omaha’. Of all these numbers from their repertoire, only ‘A Step In The Right Direction’ ever appeared on a single. Oxfordshire’s Gentle Influence have come to more prominence recently with the inclusion of their popular ‘Easy To Know’ on the ‘Le Beat Bespoke’ compilation and Top Sounds have uncovered a similarly styled nugget with their BBC only cover of Curtis Mayfield’s ‘You’ve Been Cheatin’, as well as a superior version of their final 1969 A’ side ‘Always Be A Part Of My Living’. MORE »